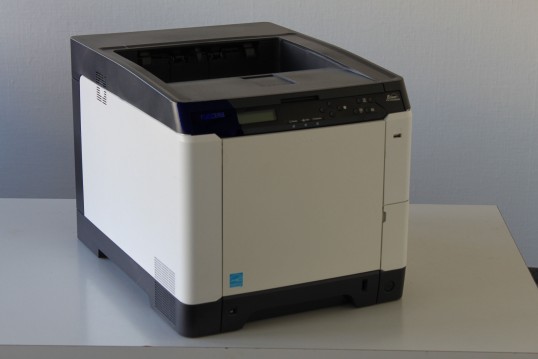 It is hard to imagine modern office environments without laser printers and copiers. Owing to their working principle during printing, these items of equipment cause emissions. For the sake of safety and occupational health, it is therefore important to use low-emission equipment. Equipment with extra-low emissions is marked with the Blue Angel environmental seal. To obtain this seal, the equipment has to be tested by independent test bodies such as the Institute for Occupational Safety and Health of the German Social Accident Insurance (IFA). In the course of such testing, the equipment's emissions are measured and assessed on the basis of strict yardsticks. An overview of low-emission, tested equipment can be found on the web pages of the Blue Angel.

State of the debate

Although low-emission equipment is available, laser printers often have the reputation of being "environmental muck spreaders". Items of information are often published and combined to yield in some cases untenable claims. For instance, benzene has been identified in some toner powders, and benzene is carcinogenic. From this it is concluded that printer emissions are carcinogenic. There have also been repeated reports on laser printer emissions in the media. Reports, like that from March 2010, according to which a team of researchers has succeeded in "detecting damage to human lung cells by printer emissions", hit the headlines and fuel the public debate. However, rational scientific justification for such claims is not usually provided. The findings of years of scientific studies and test results from several test institutes including IFA (PDF, 121 kB) are often consistently ignored. In spring 2008, the Federal Institute for Risk Assessment (BfR) presented the findings of a study in which dust and organic substances were measured in a large number of offices and people were examined, some of them claiming to be "toner dust victims". This pilot study was unable to establish a definite link between the emissions from laser printers and disease. At the same time, its authors admitted that further research was needed.

In connection with its research funding, the German Social Accident Insurance therefore commissioned the Federal Institute for Materials Research and Testing (BAM) and the Institute and Outpatient Clinic for Occupational, Social and Environmental Medicine, University Hospital of the Ludwig Maximilian University of Munich, with a study project. The project devoted to the investigation of possible health hazards from printer and photocopier emissions is a human study that scientifically examines the effects on health resulting from exposure to toner dusts and from photocopying and printing cycles. Volunteer subjects (23 control persons, 15 exposed persons and 14 asthmatics) were exposed to laser printer emissions under defined conditions in an exposure chamber. The researchers came to the conclusion that the findings from the study based on a broad spectrum of processes and subjects fail to confirm that exposure to high laser printer emissions initiates a verifiable pathological process resulting in the reported illnesses.

A much-discussed proposal for reducing emissions from laser printers is to retrofit them with filters. Retrofit filters are usually affixed with adhesive tape to the printer's fan vents where they can reduce particle emissions. Most printers usually have several openings, but all printers have a paper output tray. On the basis of IFA's experience, paper output trays are usually an important source of particle emissions. By their very nature, paper output trays cannot be provided with filters, so it is not possible to reduce their contribution to overall emissions with retrofit filters.

The Federal Environment Agency has also investigated whether retrofit filters are suitable for collecting ultra-fine particles. It has come to the conclusion that filters cannot be unreservedly recommended. "Retrofit filters do not solve the problem of particle emissions from printers per se." It is important to closely examine which filter is used, as not all filters are effective. "In addition, some of the recommendations for the user on which filter type is best for which printer are at present inadequate."

Studies and advice from IFA

The studies conducted at IFA so far have focused on substances released by the printing system comprising printer, toner and paper. These substances include dust, ozone and organic compounds like benzene and styrene. It has been demonstrated that modern laser printers that have passed the RAL-UZ 171 test only release small quantities of substances. In particular:

How laser printers can be safely operated is described in the DGUV Information 215-421 (formerly: BGI 820). It should be borne in mind that a printer set up next to a workplace and used collectively by several employees can cause mutual disruption of work processes. It is therefore worth considering whether a workplace printer is necessary or resort can be made to a central work group printer. This gives employees extra exercise that stimulates the blood circulation and counteracts one-sided bodily stressing at the workplace.

Recommendations for the safe handling of laser printers (PDF, 111 kB)

Project: Investigation on health effects of emissions from laserprinters and -copiers, Subproject LMU: Exposition of volunteers in a climatic chamber