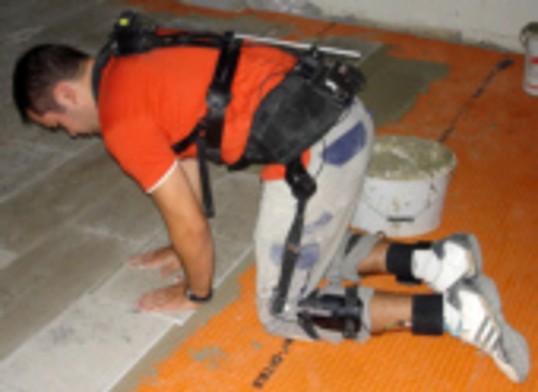 At the end of 2005, the medical advisory council at the German Federal Ministry of Labour and Social Affairs (BMAS), occupational diseases section, recommended that osteoarthritis of the knee (knee OA) caused by activities performed in a kneeling posture or during comparable tasks be added to the list of formally recognized occupational diseases.
In the scientific justification for the planned formal recognition of knee OA as an occupational disease, two essential characteristics were stated for assessment of the work-related criteria: firstly, the angle of the knee joint during knee straining activities; secondly, the proportion of time spent on such activities per working shift. Since no adequately validated findings are available at present for either of these factors, a register of measured values was to be created at the Institute for Occupational Safety and Health (BGIA) of the German Social Accident Insurance, in conjunction with several accident insurance institutions. The CUELA measurement system was to be used for this purpose.
The aim of this register was to provide valid data for quantification of the relevant load on the knee within various vocational groups, and thereby to create a basis for future prevention measures and workplace investigations in the context of procedures for formal recognition of cases of occupational disease.

Under the leadership of the BGIA, a working group was set up involving representatives from a number of accident insurance institutions. This group was responsible for the conceptual design of the planned measurements. Lists of priorities were first drawn up for the professions to be studied, and for their working shifts and the associated tasks. The task modules were studied by means of measurements involving the CUELA systems of the participating accident insurance institutions and the BGIA. The measured data were supplemented by surveys involving questionnaires regarding daily performance, duration of breaks, and secondary tasks. The survey instruments required for this purpose were planned in the working group and developed by the BGIA, which also adapted the CUELA software and trained the measurement engineers involved.
For each task module, the data were to be recorded for at least three test persons, resulting in an anticipated total of 250 to 300 shift records.
All recorded data were collected centrally in a database at the BGIA, evaluated, and prepared in register form; the accident insurance institutions concerned were responsible for organizing the individual measurements.

Ahead of the project, 22 professions were identified in which knee straining tasks could occur to a relevant degree. These were: concrete workers, floorers, roofers, electrical installation contractors, composition floor layers, vehicle trimmers, tilers, airport ramp agents, mould makers, plumbers, goods vehicle mechanics, painters and decorators, natural and artificial stone layers, parquet layers, plasterers, interior designers, pipe layers, assemblers, welders, steel fabricators, shipyard workers and carpenters. A total of 251 relevant shift recordings were performed and evaluated for these occupations. The tasks to be studied were classified in 87 task modules (typical working shifts), and measurements were performed for them. With the aid of a modified version of the CUELA software application, a total of approximately 550 hours of measurement were processed and evaluated with regard to the nature and incidence of the tasks posing load upon the knee.
All shift recordings were input into the BGIA's OMEGA-MSB database in order to make them available for further evaluation. This database can be extended continually in the future.
The representative results for 16 occupations were summarized by the accident insurance institutions responsible for them in documentation for the processing of cases of formally recognized occupational disease. These results are input in the form of register/catalogue data in the BGIA's case history software for knee disorders, which was developed at the same time, and are thus available for investigations by the accident insurance institutions into cases of suspected occupational disease.
Following a vote by the GonKatast working group supervising the research activity, the overall results are to be published in 2010 the form of an IFA report.
The "GonKatast" register of measured values will thus be available to the accident insurance institutions, for which it will be a useful instrument for investigating the work-related criteria during investigations into suspected cases of occupational diseases of the knee (BK 2102, 2105, 2112) and the identification of prevention foci in the area of occupational knee strain.