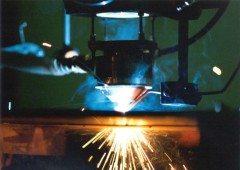 We are exposed to radiation on a daily basis – yet rarely notice it. This becomes clearer when a differentiation is made between the various types of radiation:

Radiation can have positive effects, for example the pleasant feeling of warmth that accompanies moderate sunlight. This notwithstanding, it can also have adverse effects including serious damage to health leading to death. Depending on the type of radiation in question, the intensity and duration of exposure and the area of the body exposed, the implications of exposure to radiation can range from minor, temporary effects (e.g. sunburn) or serious, long-term diseases including cancer.

Radiation can also affect employees in the workplace – whether used consciously as part of a work process or as an undesirable side-effect. Activities which may expose employees to radiation in the workplace include the handling of radioactive materials, the operation of x-ray devices, UV-based drying, hardening, sterilization, crack detection and code recognition, welding, transmitter-related work and induction welding. The degree of radiation exposure is to be restricted if damaging effects are to be avoided, and this requires the implementation of suitable protective measures.

The risks that accompany exposure to radiation are often misjudged. The development of a culture of radiation protection and introduction of both radiation protection techniques and detailed regulations has seen the number of accidents and diseases caused by occupational exposure to ionizing radiation fall to a relatively low level over the last few decades. There are only a few types of workplace in which employees may still suffer dangerous exposure to electromagnetic fields, with accidents and diseases caused by occupational exposure to electromagnetic fields now practically unheard of. Wearers of active bodily implants such as pacemakers may nevertheless be put at risk by electromagnetic fields. With the number of implant wearers on the rise, more attention needs to be paid to this issue in future.

Exposure to optical radiation – and in particular UV radiation – carries the highest risk when compared with other types of radiation. A significant proportion of the 140,000 new cases of skin cancer (approx. 2,000 to 3,000 of which are fatal) and roughly 500,000 to 600,000 cases of cataracts diagnosed each year are attributable to exposure to UV radiation. Though the majority of cases are caused by private exposure to solar radiation (e.g. during leisure time and holidays), the use of optical radiation in the workplace – which has developed disproportionately in recent times – can also damage employee health. The classification of “skin cancer as a result of exposure to UV radiation” as an occupational disease is currently being debated.

German legislation regarding ionizing radiation takes the form of the Radiation Protection Ordinance (StrlSchV) and X-Ray Ordinance (RöV). EC Directive 2006/25/EC (artificial optical radiation) applies in the case of optical radiation, and has been implemented in German legislation in the form of the Ordinance on the Protection of Employees Against Hazards caused by Artificial Optical Radiation (OStrV).

Accident prevention regulation BGV/GUV-V B11 "Electromagnetic fields" still applies in the case of electromagnetic fields. Here again, the EU is set to pass a relevant directive which members states will subsequently be required to implement in their domestic legislation.

Further contacts:
With technical questions or with questions for the interpretation of the relevant regulations to the topic the specialist area ETEM and the subject “electro-technology and precision mechanics” can give competent information to radiation.